10 Lazy Ways to Help the Environment

Our planet - a huge, beautiful place, and yet one that many of us don't think about that much. We breathe its air, eat food grown from its soil, drink its clean water, and yet it could wipe us out easily with a well-aimed earthquake or tsunami.  Doesn't such a magnificent thing deserve a little respect from us all?

More and more helpful incentives are coming into effect to help us live "green" lifestyles - recycle bins, charging for plastic bags in shops, and some places even offer money when you recycle glass bottles. Still, I know that it can often seen time consuming, or inconvenient, to do the "green" thing, and while we can't all live off the land from a tepee (sounds interesting, though!) there are a few simple actions that we can all take to help reduce our impact on the earth. 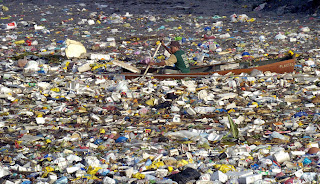 1) Reduce your bottled water consumption - bottled water is not better for you, not safer than tap water (in the US and UK, anyway), and most people can't tell the difference. Don't believe me? Watch Penn and Teller's "Bullsh*t" episode about bottled water here - it's funny and very enlightening. Imagine filling a bottle of water 1/4 way with oil - that's how much oil was needed to produce that bottle, according to Kids National Geographic! As well as requiring loads of resources to make, these bottles cause a ton of harm when we throw them away. Have you ever heard of the North Pacific Garbage patch? Due to ocean currents, a LOT of our rubbish ends up here... imagine an area the size of Texas made up of over 80% plastic. This material never fully breaks down, meaning that it ends up being swallowed by fish. As well as this, those bottles take up a lot of landfill space, and the alternative - burning them - releases loads of harmful toxins into the air. Not to mention that toxins might even be leaking into your water from the bottle (see here). The first thing you can do, of course, is recycle those bottles - at least then they can be made into nice things like carpets and fleece. If you live in a country where it's safe - drink tap water; you can buy a filter and stick it in your fridge, too. When you're out and about, re-use your bottles or take a flask of water with you. If you really like your water carbonated, you can invest in a Soda Stream - it make your water sparkle in seconds, and you can buy flavoured syrups to turn it into cola/orange soda/lemonade etc.

2) Re-use your shopping bags! - this is becoming easier, especially in the U.K. where many places charge 5p per plastic bag. It's easy to forget, so try to have at least one folded plastic bag in your handbag (for spontaneous shopping). Even better is to use a fabric bag, like the "Bags for life", which cost a little more but aren't plastic!

3) Use energy-saving light-bulbs - They do cost a little more, but they also last a lot longer, and as well as being better for the environment they'll save you a ton on your electricity bill. It only takes one moment at the store to choose an energy-saving bulb over a normal one.

4) Recycle! - OK, we can't always be sure that the things we recycle are really ending up where we want them to. By just separating your own rubbish, maybe using two or three bins in the house and hauling them outside into the separate bins, you're doing a lot to help. Take the bins down on your way to work, have the separate boxes/bins next to the main bin so that you remember when you go to throw something away. It doesn't have to be a huge deal - just make it part of your routine.

5) Buy second hand, sell your stuff - why always buy new? Perhaps we're worried that we'll seem poor or stingy if we hold on to our old things or don't have the latest fashions and gadgets, but if the marketers of new products didn't work hard to make us believe that, where would they make their money? Find out what you need, and see if you can get it second-hand before buying new. Websites like Freecycle are designed for those who have things to give away - clothes, furniture, bikes, you name it. Charity shops are usually full of bargains (books, DVDs, games, clothes and ornaments!), and checking websites like Gumtree or other local listings might give you a few nice, cheap things. They're cheaper, they have history and the less shiny new things we buy, the less the demand, and so less energy is used to make them and less plastics end up on landfills. When you have stuff to give away, too, use similar methods rather than just throwing things away.

6) Cycle/walk - If you have a short trip to make, ask yourself if you really need to use the car. It will cost you a lot of petrol money, it will be a pain trying to find somewhere to park, and you'll be pumping more unpleasant emissions into the air. Not everywhere has good roads for cycling, of course, but if you're lucky enough to live somewhere that does, then do it! Cycling also has the lovely advantage of being really good for you. You could also car-pool - if your neighbour is going into town around the same time as you, ask for a lift. If a co-worker lives near you, agree to take turns in driving to work. If public transport is good in your area, use it - you'll save a lot of money in the long run, too.

7) Check your taps - yes, even something as seemingly innocuous as a dripping tap could be adding loads to your water bill. Different sources claim that you can waste between 120 and 24,000 litres a year from a dripping tap! 1 billion people in developing countries do not have access to clean water. If you're thinking "That doesn't affect me", then you might want to take into consideration that the population is rapidly growing and that over-use of water in one place affects the availability of it elsewhere. The World Water Council website gives a nice overview. Basically, try to limit the amount of water you waste. When you shave, turn off the taps. Keep showers short. Tighten the leaky taps, or get them fixed.

8) Turn your washing machine down - just turning the washing machine down from 40 to 30 degrees can save a LOT of energy! Longer cycles aren't as bad as hot ones - the higher the temperature, the more energy it takes. In Japan, our washing machines only used cold water, and yet they still worked. There are a few other things you can do, too - fill the drum to its full capacity (don't overload), so that you're using the machine less frequently. Use the right amount of detergent, as too little can mean you have to wash everything again and too much can mean an extra rinse. Dryers use a lot of energy, too, so if you can hang your washing out on the line or on a drying rack, do it! Again, your electricity bill will thank you.

9) Don't leave things on standby! - According to a study cited in the Guardian, 8% of our annual electricity bills in the U.K. are from items left on standby. Yes, it can be easier to press the "off" button on the remote rather than the main switch on the T.V., but apparently most items use up to 90% of their normal power when on standby. These items are responsible for up to 4 million tonnes of excess carbon dioxide a year! See the article here.  It doesn't take much energy for you to get up and turn off the T.V. or stereo, unplug things that aren't being used or at least turn them off at the wall. It's quite shocking to see how much one little moment of laziness from us can damage the environment.

10) Order vegetarian - as well as a bunch of other reasons (ethical, health, financial), being vegetarian or vegan is good for the environment. You can get an overview even on Wikipedia of the impact of the meat industry - the large amounts of land needed to breed all the animals, for one, plus the strange fact that cows' farts are increasing the methane levels in the environment! There's a pretty effective article here, which claims that livestock farming produces more greenhouse gases than all forms of transport combined! Now, I'm not saying that I never eat meat, nor that you should turn vegan or vegetarian - it's a massive step, and something that takes time to adjust to. What I'm saying is - on some occasions, when you have the choice between the healthy salad and the burger, or even between the beef and veggie burger, try the vegetarian option sometimes. If you're making a meal at home, ask yourself if it really needs the extra meat. You might find that you really like vegetarian food, and that cutting down on meat makes you feel healthier, too.

Sorry to put a downer on things, but things are going to get bad if we don't all work together to change them - and spending your life pretending that it isn't happening, claiming to have no time because you're too busy working, will all seem a little silly when the next generation are struggling to find clean water to drink because of our apathy. That might sound a little melodramatic, but we do need to do what we can to help.

These steps are just small changes that you can make without really noticing. When you're ready to do more, of course, there are plenty of volunteer organisations you can join! Philanthropedia has a list of not-for-profits that you can look at, and of course there are the famous ones like Greenpeace. The U.K. government's environmental agency website has some useful information, too. Good luck with going green!

Email ThisBlogThis!Share to TwitterShare to FacebookShare to Pinterest
Labels: environment, health, the world