Why Travelling Isn't Just for the Rich or Retired 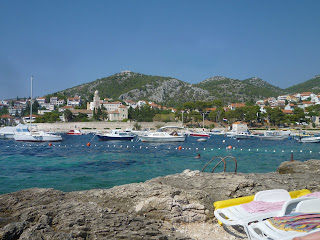 Sharing my holiday snaps online, I realise that I might sound a little like I'm bragging. Yes, I spent the last twelve days travelling around the Balkans in glorious weather. I swam in the Adriatic, visited a beautiful national park, enjoyed some wonderful seafood. But as I snorkelled through crystal clear water, chasing mischievous little fish and feeling the sun on my back, I realised something. Most people might never do this. Most people might never afford this... or at least, that's what they tell themselves.

How often do you dream of adventure and excitement, only to sigh and say "Well, I'll do it when I'm retired/when I win the Lottery/when I finally pay off my credit card bills".


I do meet a lot of independent young travellers out there, who are happy to "rough it" on a small amount of money in order to experience a lot. While this is encouraging and exciting, a larger proportion of younger people have been terrified by the recession and cling to what they have with all of their might. They work hard, saving every last penny. I'm not saying there's anything wrong with working hard and saving up, but what upsets me is when people who want to travel say "This is the time to save money. I'll travel when I retire". Apparently, there is no time, not enough money, to travel now. Instead, they'll knuckle down and work hard, dreaming of white sand beaches or safaris as something to work for.

If this is something you've been telling yourself, firstly let me just ask- what if you're too old to really enjoy yourself. Yes, there are big couch groups of elderly people who have a grand old time, but do you really think you'll enjoy walking around those old towns or up mountains on seventy-year-old hips? Part of the beauty of travelling, for me, is roughing it a little, but I guarantee that the older you get the more comfort will mean to you. You'll want private hotel rooms with en-suite bathrooms, not some rickety bunk-bed in a room full of students. Countries that are cheap to visit now might not be in the future.And, I know it sounds morbid, but what if you don't make it to retirement? You never know what tomorrow will bring. Don't you deserve a bit of fun in your life now, while you're able to enjoy it?

I'm not saying we should all live like hedonists, throw caution to the wind and blow all our money on travelling. We can't all afford to take a year out of our jobs and travel the world. But it seems people claim that they can't afford even a week or two abroad without having any real idea of how much money they need. Spending a normal week in London, with drinks and meals out, might cost the same as a whole month in Prague.

Let me tell you the other thing - I'm not some rich kid who can afford to do whatever I want. I make less than £10,000 a year at the moment. But I still have some money saved and manage to travel around parts of Europe. How? I don't go out to eat much, and when I do, restaurants in Prague are cheap - a beer and a meal for around £5. I hardly ever buy new clothes, shoes, DVDs, CDs, accessories, unless I absolutely have to. I use public transport instead of owning a car. My home comes with the bare minimum because I know I won't be there for long. My weekly groceries rarely top £20, I cook at home and spend most of my money on basic ingredients (vegetables, rice or pasta, some spices to flavour it) rather than expensive, pre-packaged additions. I'm not ashamed to tell you that I usually cut my own hair, too. All of this might cause some people to look down on me, to see me as skanky or stingy or whatnot, but I'm happy and I just see so many of those things as a big waste of money. We're in a recession; who cares who designed your handbag?

Now imagine travelling. Perhaps what makes you clutch at your purse strings with fear is the thought of expensive hotel suites, air-conditioned private buses and lavish meals. Well, flights are so much cheaper than they used to be, and if you spend enough time online you can find flights within Europe for under £50. You could even take a series of buses, the Dover-Calais ferry... Scary as it might sound, many people now hitchhike, but even local buses and trains from city to city are cheap. Look at countries where the exchange rate will go a long way for you. Western Europe is expensive, but right now things are much cheaper in the Eastern part, and tourists are just starting to discover the beautiful coasts, landscapes and people that these relatively new countries have to offer.

We stayed at cheap hostels and we Couchsurfed. I am still in love with Couchsurfing, as every experience we've had has been great. We did enjoy some nice restaurant meals, but we also used our hostel kitchens to cook, or bought bread and cheese from local supermarkets and enjoyed them on the beach. We didn't spend money in every touristy museum, but walked around and soaked up the atmosphere. Of course, there are moments where you feel dirty, where you wish you were on a bus with a toilet or that you could afford a little more, but what will you learn about a poorer country from the windows of your Hilton room? I was with my fiancé and my best friend, and we were having too much fun to care about the fact that we were washing our clothes in the sink or drinking £2 bottles of wine. In fact, that only added to the fun.

So, save up a little and take a break while you're supple and adventurous enough to enjoy it. Of course there's nothing wrong with travelling when you're older, but does that mean that you can't start a little now? As you can see, you can do it on a budget, and there are plenty of ways to save up over the year (especially if you don't have kids or a mortgage yet). What else is holding you back?