Well, as the first day of my Something New Every Day challenge, I felt pressured to do something BIG. What should it be? Naked parachute jumping? Playing with live tigers? Those thoughts did cross my mind, but after a few comments asking how one is supposed to fit something new into their schedule every day, I decided to keep things low-key.

It's Saturday, so I did have more time than I normally will - the rest of the week will be much smaller changes, and hopefully those will give you an idea of how small the "new things" can be.

Today, I started off by eating a lovely stawberry cake at a new café in Prague. Outside, I noticed a box of chalk with a comment saying "you can draw!" - so I drew a cat. Not a huge thing, but I'd never drawn a cat in a public space with chalk before, so... why not? 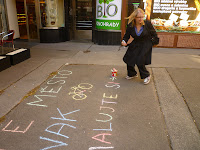 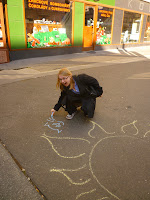 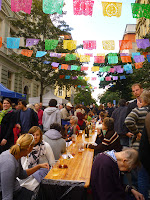 After that, we headed to a festival that was going on - a lot of restaurants on Americká were advertising their food, as well as a lot of random stalls selling clothes, wine etc, music playing lots of children and dogs running around. Nothing was massively new there, although of course I'd never been to that particular festival before! Some of the stands talked about the rights of illegal immigrants in the Czech Republic, and it was very interesting and eye-opening to read about some of the awful conditions that some people live in. 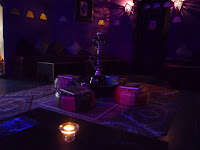 We spent a bit of time in Maghnia Village, a cool shisha bar that sometimes even has live belly-dancing shows and always has nice teas. I tried Strawberry and Chocolate tea, which was interesting, although I don't think I'll repeat the experience. After that, we joined some friends for dinner at a place called the Hairy Ghost, where we had some nice pizza (well, I had a bunch of vegetables as my stomach wasn't feeling up for a lot of cheese). After that, we found a cool little bar with hardly any people, but three pianos. Jeff played some music for us, so perhaps performing in a bar can be his new thing for the day.

So, what about you? Did you manage to do something new or different? Even if you didn't try a new place, anything that's out of the ordinary or interesting is great. I've already had people tell me that they've tried ultimate Frisbee, planted spinach seeds and tried cooking some new dishes today. I'd love it if you commented below with your own!