Something New Days 34-40: Pumpkins, Castles, Singing on the Subway

Hi again! It seems that a few of you have given up... I know it's hard, and that most of us are too busy to be able to truly do something new every day. In fact, there are days when I struggle to think of something to call "new" - but I'm determined to power on in the hope that it will give you some inspiration! As you'll see, I am quite obsessed with food and restaurants, but some of the new things are only ways of thinking, or other minor changes.

Day 34 (Thursday 25th October) - My friend and I checked out a relatively new Vietnemese restaurant in Prague (Pho Vietnam). The same owners already had a popular take-away, but now they have a sit-down version - but you still go up to the counter to order and pay. The food was delicious, and very cheap.

﻿
Day 35 - This weekend marked the Hallowe'en retreat for my new group, the International Choir of Prague. For two nights we stayed at a hotel in the countryside, singing and partying. This was my first time in the area known as Česky Raj (Czech Paradise), and the hotel location was amazing. We were situated on top of a mountain, two mountain peaks mounted by castle towers overshadowing us.

Day 36 - Still at the retreat, there were a few firsts. We learnt some new songs, for one. I dressed as a pirate for the evening party (not entirely a first, but a new costume). The most exciting new thing was carving a pumpkin! I'd never tried that before, and to make matters trickier, we didn't carve a face into ours but "ICP" (the choir's initials). I cut the "P" - it's quite hard to push your knife through the pumpkin, but not as hard as I'd imagined. 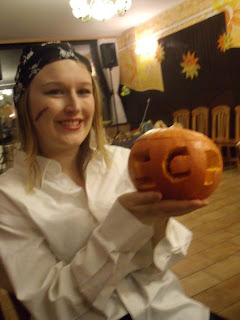 Day 37 - Well, I'm going to cheat a bit on this one, and count it as past midnight on the previous day (also when the clocks went back). To kick start our party, one of the girls led us all in a salsa dance. I learnt a few new party games, too... but I won't give too many details here!

Day 38 - Ah, Monday. It was a busy day, with hardly a breath to be had between working. One of my working hours, though, was life coaching a new client via Skype. He was based in the States, too, which is a first!

Day 39- With 90 minutes to spare between classes, I found myself wandering around a part of Prague that I don't know that well (Florenc), and chanced upon a vegetarian restaurant that I'd never heard of before (Mlsna Kavka). It was pretty good - I had a veggie burger and chips, and some nice leek-based soup.

Day 40 - Not sure of what to do, I found myself singing quietly on my walk up to the metro (as I tend to do anyway). I decided to keep this going into the metro to see how loudly I could sing before I was given a strange look. I didn't get very loud, but eventually somebody dared to look at me. It made me smile a little to see the "Get me away from this crazy person!!" look in someone's eyes, but also a little sad. What's so wrong with having a song in your heart, eh? Perhaps I know how Maria von Trapp felt, having to go into the mountains to sing. Ah well, that's why I have choir (and karaoke).

So, that was my week! Feel free to send me suggestions for new things to do!
Posted by Gwyneth Hamann at 16:54

Email ThisBlogThis!Share to TwitterShare to FacebookShare to Pinterest
Labels: SomethingNew