The Truth About Multi-tasking

I had a little revelation the other day. Somewhere between the half-written email that I found two hours after starting it and the empty cup that I had prepared an hour ago - and completely forgotten that I'd boiled the kettle - I realised that I really need to learn to focus. When you're trying to plan a wedding, work almost full-time and set up a business from home, it can be hard to really get things done.
How often do you set out with a huge to-do list, only to find that you haven't completed any items on it by the end of the day? How often do you find that "something came up" and you completely forgot about the thing you were supposed to be doing? Do you ever walk into a room and forget why you were there in the first place? It's possible that there might be too much on your mind, and that by trying to get a lot of things done at once, you're not actually being more effective - but less.

I picked up a very interesting book the other day, called Your Brain at Work

. In this lovely little book, which applies findings from neuroscience to our everyday lives (especially at the office) in a way that's easy to understand, David Rock discusses how multi-tasking might, in fact, slow us down rather than speed us up. Trying to write that email, plan your next meeting and eat your lunch at once might not make you a more efficient worker - it has the exact opposite effect. To some of you, that might not be news - but many of us have been told that multi-tasking is a skill. We think of our ability to do several things at once with pride, our colleagues and bosses seem to praise how busy we seem to be - but what if we're actually just frazzling our brains unnecessarily?

You know how it is - you have a million things to do. It's a busy day at the office, and your boss won't stop breathing down your neck. You simply don't have time to sit around doing just one thing - what a waste of time! - so you work on that presentation, pause to fill in a little more detail on that spreadsheet, check your emails. Your phone rings - it's your supervisor. You'd better answer that, or there'll be trouble. He wants you to write a report on the monthly figures, so you open Word and stare at a blank page for a while. An hour or so later, you might remember the presentation that you opened and curse yourself for only getting one slide done.

If Mr Rock is right, our brains are far more delicate than we like to think. Our prefrontal cortex, the conscious part of your brain that does all the thinking that you're aware of, doesn't run on unlimited space. When you try to think about your upcoming holiday, how to improve your website's ranking and settling your bank account at once, perhaps while trying to finish that project on time, you overcrowd the "stage" and leave yourself unable to do any of those things as effectively as you might. 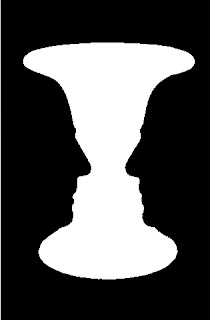 As the computer whizzes among you know, when you have multiple programmes and tabs open, your computer isn't really processing them all at once; it switches between them at rapid speed. This is what your brain does - it cannot really do everything at once, but switch its attention back and forth between two things. Take a look at the optical illusion on the right - it is possible to see two faces looking at each other, or a vase, but it is impossible to actually see both at once. You can flick between them very quickly, but you can never perceive them at once. It seems that our attempts to get a lot done in a short amount of time are counter-productive - we actually lose a lot of time switching between tasks.

Of course, I'm not talking about reading a book while on the bus (although it's important to listen out for your stop) or listening to music while painting. You might be able to shift your brain onto auto-pilot for repetitive tasks that don't require much thinking, so that you can think about something completely different as you drive to work or make those photocopies - but, if it's your first time or there's anything slightly new, you'll need to pay attention, and that's when it can get tricky. I'm sure you've "zoned out" before, only to find that you missed a turning or typed something that doesn't make any sense. Our brains are lazy. Try to do two complicated things that require your focus at once, like holding a conversation with a friend and navigating a new driving route, and you'll see how hard it can be. It doesn't have to be two physical things, though - you might be trying to brainstorm new ideas while freaking out about an upcoming deadline, or recalling some previous incident. We've come to think that this is the way to be - detached from the world, lost in our thoughts, running around like headless chickens. Aren't you tired?

It turns out that if we focus on one thing, close all other tabs and ignore our phones (unless it's an absolute emergency), we are more productive, efficient and awesome. It's really true - I've been trying it for the last few days. I've been limiting my tabs to three - one for music, one for what I'm actually doing (like writing this) and one for brief moments of research, like when I need to find a statistic or the name of an author. In just a few days, I've found myself getting a LOT more done, and feeling a lot less confused and out of it. While this might seem like common sense to some of you, it's made a big difference to me in a short amount of time.

There's a nice article in the Guardian that I came across that relates to this - it's about Mindfulness at Work. I talk more about mindfulness in other posts, but in a nutshell, it means being in the moment. When you're working on your essay, just work on your essay. If you can't focus, take a break and go back. When you're talking to your friend, just talk to your friend - stop checking your phone! When you eat your lunch, just eat your lunch - it will taste better, too, as you will be giving it your full attention instead of shovelling it into your mouth while you stare at old episodes of Lost (ahem) or playing with your phone. Do the task you set out to do, and do not start anything else until it is done, or until you officially close it for the day or a break. When you switch the kettle on to make a cup of tea, wait near it until it is boiled, pour the tea and take it with you to your work room(if you are as absent-minded as I am). Use those reminders on your phone, and write things down when you remember them, so that you can do them later instead of piling on tasks or forgetting about them.

We live in a crazy world, where this corporate, fast-paced 21st century lifestyle prizes multi-tasking, but is it really worth burning yourself out? If you can allocate time to focus on one task, isn't it worth giving it your full attention and doing it well, rather than trying to be in five places at once? If you've read this post to the end without clicking on other tabs or anything else that wasn't an emergency, then you're on the right path. If, however, you skimmed it, skipped to the end or found it half-read a couple of hours after you opened it, it might be time to work out why you have such a hard time focusing on things, and figure out a way to improve.