On the 14th of March I'm running a workshop and seminar about the value of spending mindful time in nature in Lifeways Centre, Stratford-upon-Avon.

Both Mindfulness and spending time in nature have been shown to reduce stress, increase feelings of wellbeing and meaning in life, improve health and increase energy. People who have spent a lot of time in nature often say that it was one of the most meaningful experiences of their lives.

These days, people spend around 90% of their lives indoors, often staring at a screen of some form. This is not the way we evolved. Too much sitting, too many screens, too much time indoors makes us feel ill, disconnected and unhappy.

In my workshop, I hope to show you some of the science behind the benefits of spending time in nature. I also plan to do some basic mindfulness exercises, then to go into the Lifeways garden (which is beautiful) and practice some mindfulness in nature, so you can begin to see for yourself how this simple practice can transform you.

We are at a point of crisis, ecologically - we are living beyond our means as a planet and, according to around 97% of scientists who contributed to the International Panel on Climate Change report (2014) we need to act fact to change our ways if we want to survive. Yet, if we don't truly and deeply care for nature, or understand it, we can't be expected to make those changes. We will also talk about the implications of this and how we might be able to use mindfulness in nature as a tool to bring about positive changes in how people interact with the environment. 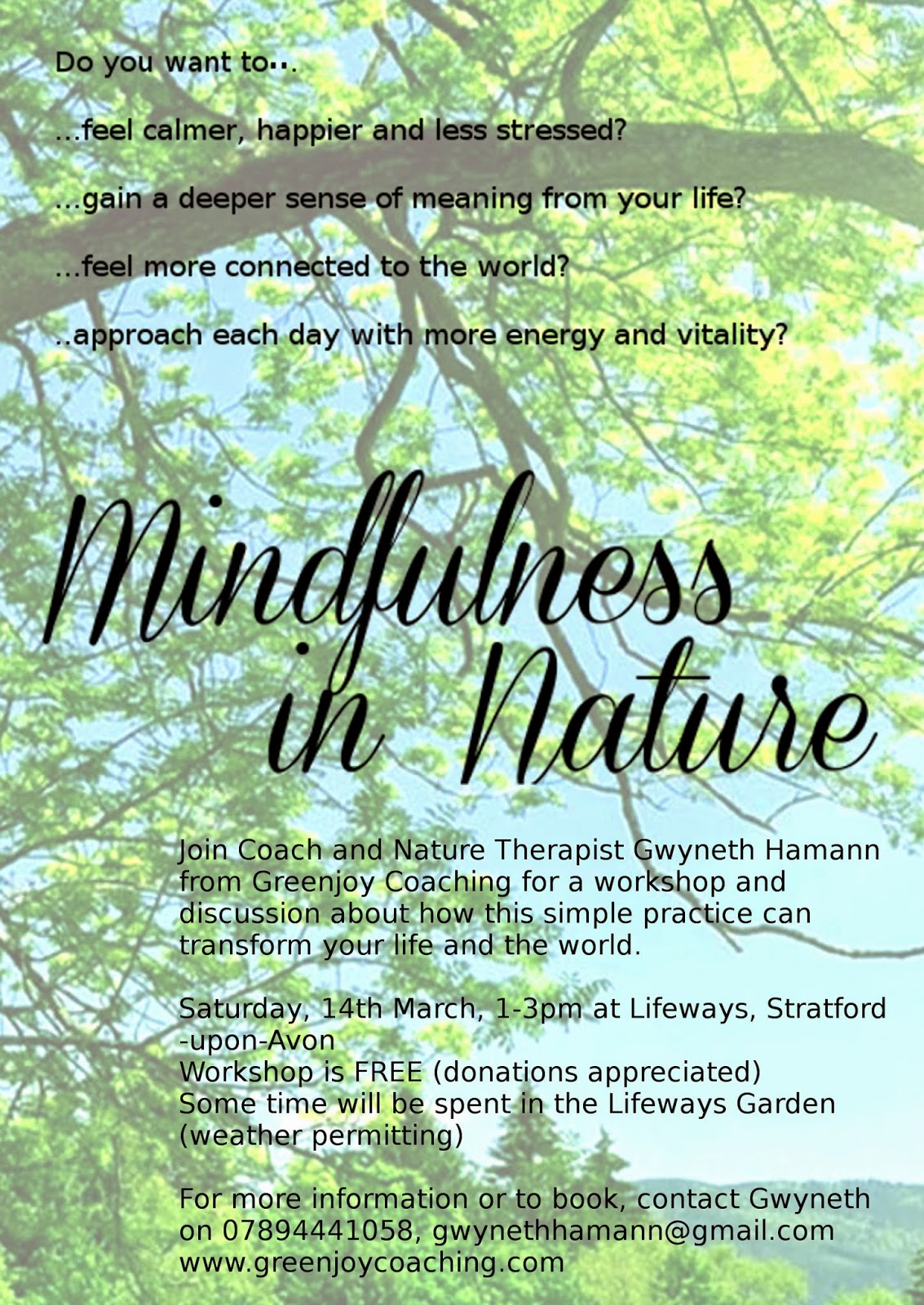 Also, its free! Come along!

If you don't know where Lifeways is, check out this map! You can get to Stratford-upon-Avon by train from London Marylebone or Birmingham quite easily, but please contact me if you're not sure.
Posted by Gwyneth Hamann at 12:44 1 comment:

Kale. I never really knew what it was, but I knew that it was good for you. Whenever I looked up healthy, 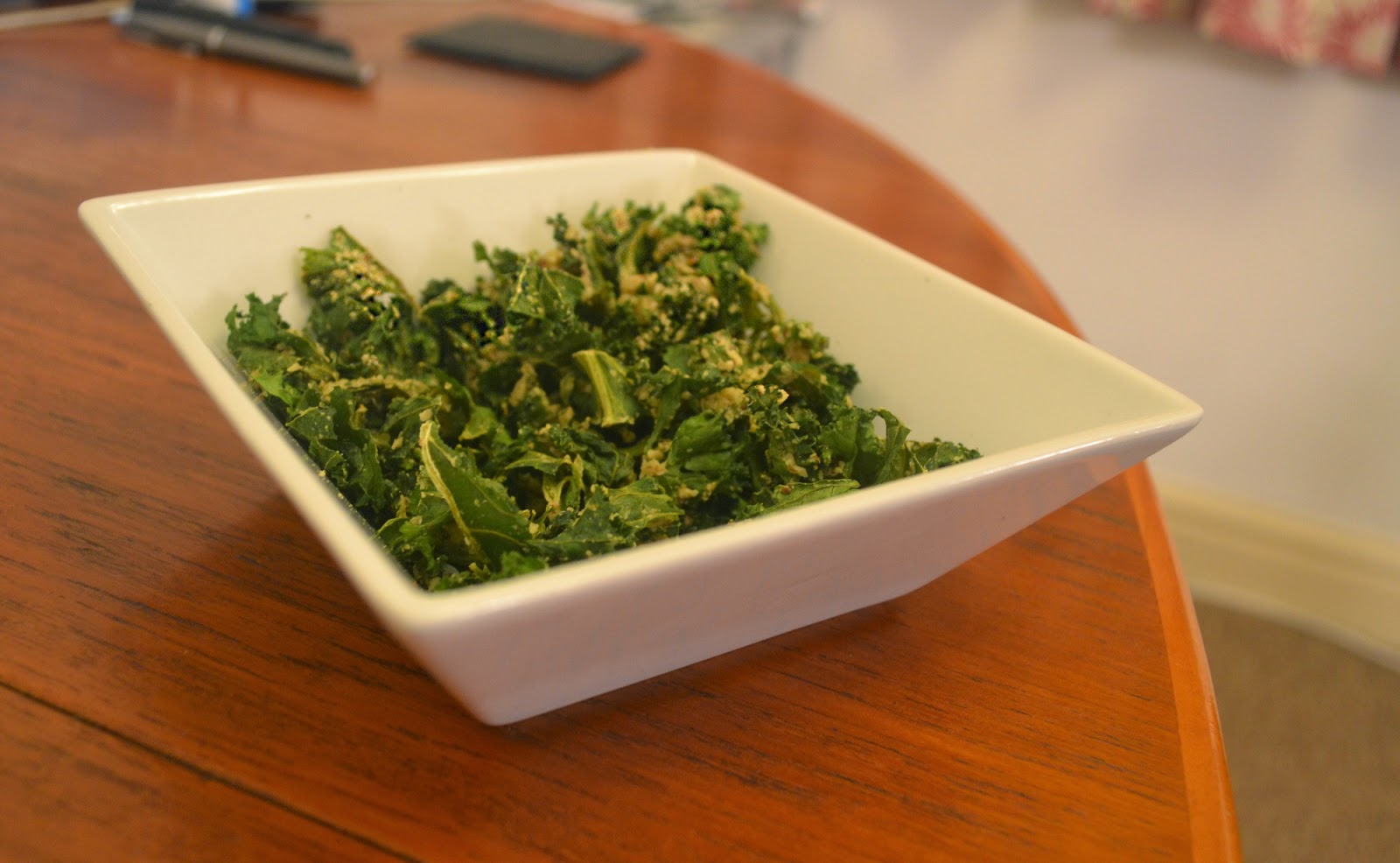 clean recipes or vegan food, kale would pop up. In salads. In smoothies. Everywhere. I'd never really seen it before, and all I really knew about it was that it was healthy and, that if I wanted to get on the "healthy" bandwagon, I'd have to try it sooner or later.


After Christina used it in a smoothie and in a delicious quinoa dish  I figured it was time for to finally give in.
So... I bought a bag from Tesco for £1. It's like a dry, crispy lettuce. I threw it in with some pasta, peppers and pasata for a tasty dinnertime snack, and it was all right.


Still hungry, I remembered that one of my prettiest recipe books - Honestly Healthy

- had a recipe for "cheesy" kale chips. This book tends to be pretty complicated, but when I looked at the recipe I saw that it mostly involved coating kale in some kind of cheese substitute and leaving them in the oven for a while (it also mentioned a "dehydrator", but I figured an oven would do for most of us). It just so happened that the Lemon Cashew Basil "cheese" that I'd just made was pretty close to what was called for, so I experimented and was greeted with a delicious snack.

Be warned... they're really moreish! The good news is, they're much healthier than Pringles...

You'll need:
Half a bag of kale (or however much you want, really)
2 tbsp of Lemon Cashew Basil cheese

1. Spread the kale out on a baking tray. If using foil, use the non-shiny side!

2. Rub the "cheese" onto the kale until it's all coated.

3. Leave in a fan over on the lowest heat for 30-45 minutes, or until the kale is sufficiently crispy. 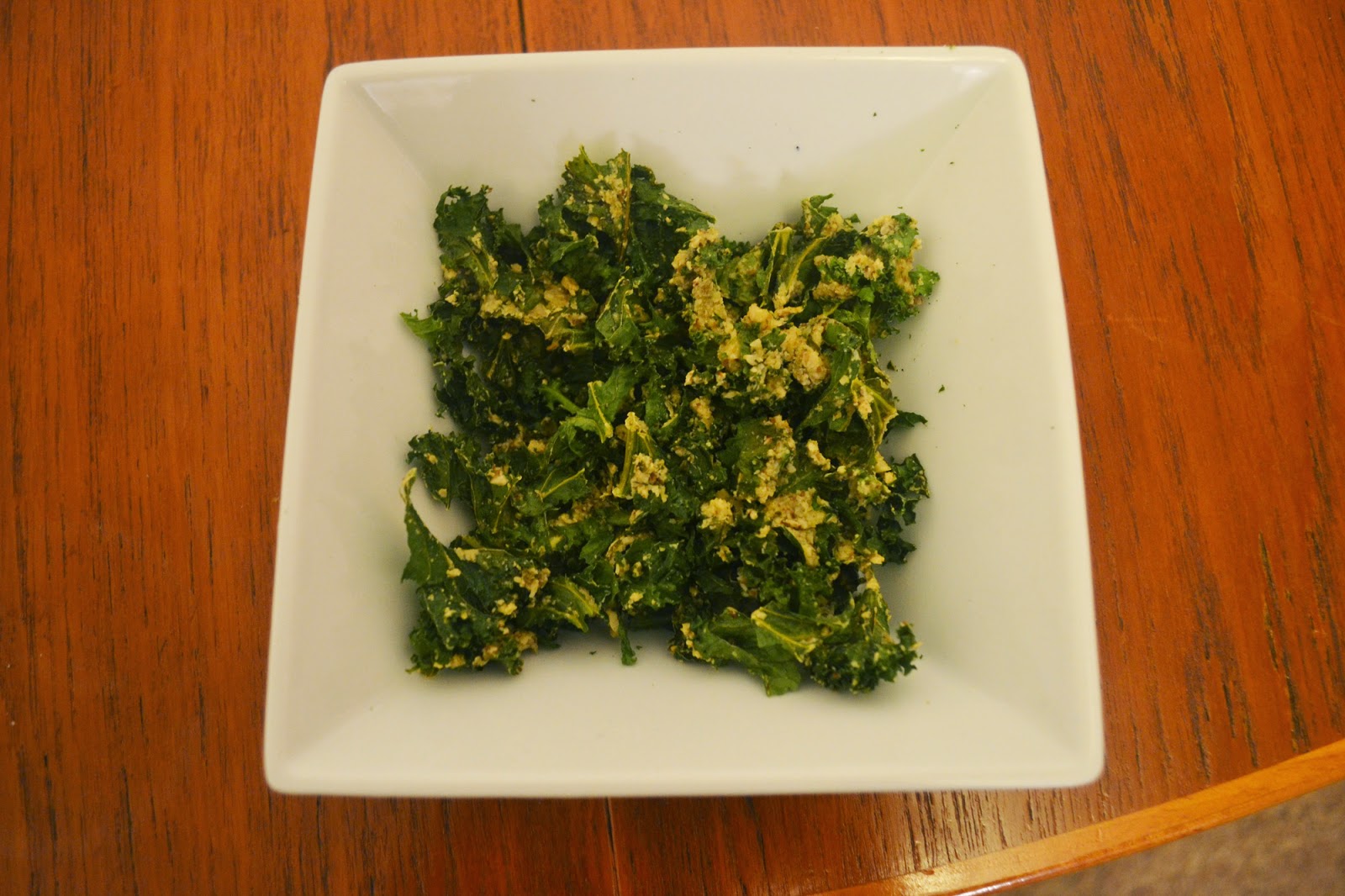 It reminded me a little of the crispy seaweed that you can get at Chinese restaurants. Either way, this snack was so good I made a second portion!
Posted by Gwyneth Hamann at 12:29 1 comment: